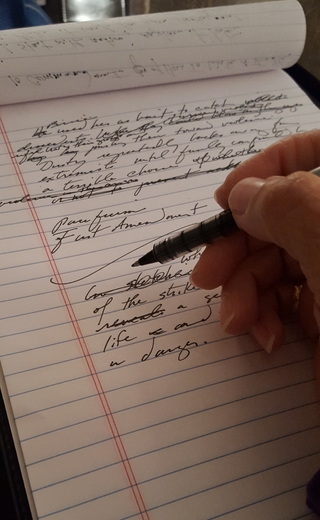 Confessions of A Practical Idealist

I want a beautiful world.

I actually said that in a job interview once. Not exactly the follow-up response the interviewer was expecting, I suppose, because she frantically started looking over her list of questions to see what she should say next.

Smoothing an imperceptible wrinkle in my black linen suit, I leaned forward with a conspiratorial smile. “I bet you’re wondering how that relates to grant writing?”

“That was my next question,” she said without a trace of irony. A heavily ringed hand ran nervously through her bangs, pushing them back to reveal thin streaks of silver in a tangle of nearly blond hair. She was taking notes on a yellow legal pad with a cheap pen, the kind that tends to leak sticky blue-black ink without warning. But there was also an impressive array of freshly sharpened pencils lined up in front of her. They screamed financial director, accountant type. Touchy-feely she was not.

I took a long pause, then in a soothing voice continued. “I don’t know about you,” I said, gesturing up at a blinding bank of fluorescent lights, “but my idea of Utopia includes being able to pay the electric bill on time. When I come up with an idea, I want to find a way to bring it to fruition, make it happen.” The interviewer nodded. She made another check mark on her list.

“I see you were a graphic designer. What made you decide to go into grant writing?”

This gave me a chance to regale her with tales of working as a magazine and book designer, and later as a courtroom sketch artist for a television station. Then I gave her the short version of how allergies to the art materials eventually made me transfer my skills to a new career.

“I’m a practical idealist,” I said. “Money is just another tool for taking an idea from concept through to completion.”
She suddenly looked up at me, wide-eyed.

Are you expecting me to jump up on the conference table and start chanting peace slogans or something? I sat up straighter, trying to mirror her posture. “I didn’t make that up. Gandhi called himself a practical idealist.”

A dab of paint, a search for truth, a resource strategically placed. An inner imperative to improve, to beautify, to change is the same whether it’s used to create a painting, or write a grant proposal, or face down the British Empire in a loincloth and sandals.

The first grant I ever wrote was as a freshman in college for a free summer art program. The college agreed to offer classes in art and photography to kids from the surrounding Brooklyn neighborhood. Everybody needs tools to help transform their anger, and curiosity, and confusion into wonder. That’s what art gave me.

I got the job.